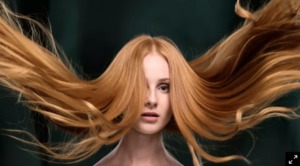 Celia Pavey​ has firsthand experience with the way that failure can make you grow. Pavey, better known as Vera Blue, is the rising singer-songwriter who blends the raw expressiveness of the folk tradition with all the future-forward optimism of electronic music. When she was growing up, she embarked on that age-old musician’s rite of passage. She performed on the streets and received a chilly response.

“When we used to drive to Sydney Mum used to make us listen to CDs in the car and, back then, I really loved to busk,” laughs Pavey, who’s just released Lady Powers, an addictive EP that’s an ode to the power of young women. It features remixes by a line-up of female collaborators including California beat-maker TOKiMONSTA, electronic producer Maria Marcus, Melbourne artist Alice Ivy and London DJ Maya Jane Coles.

“Once, I made the total mistake of busking in Martin Place. No one gave me anything.”

Pavey, 24, is recalling this anecdote from a corner table at one of her favourite hangouts, Ruby’s, a cafe near Bronte Beach with a faintly nautical theme and pervasive air of wholesomeness. She greets me with a hug in a vintage, floral dress and pink earrings that graze her shoulders. It’s easy to mistake her as a slightly more glamorous version of the 20-somethings that surround us, tucking into buckwheat pancakes on this sunny autumn Friday. That is, until you witness the excitement that lights her face when she talks about figuring out a melody; the intense way she describes the thrill of baring her soul to a crowd.

Pavey appeared on the country’s radar during the 2013 season of The Voice. She floored the judges with an acoustic cover of Simon and Garfunkel’s Scarborough Fair. Later, she took on Dolly Parton’s Jolene, her voice – a swooping, shimmering thing – conveying the longing associated with one of the famous love triangles in music with spine-tingling acuity. Last year, she received an ARIA nomination for her debut album, Perennial. This August, she’ll play the iconic festival Lollapalooza alongside the Weeknd​ and St Vincent. “When I release a song and know that I’m about to tour it, it makes me so excited,” she grins, taking a sip of her cappuccino. It’s hard to imagine a city commuter passing her by these days.

Pavey grew up in Forbes, a former Goldrush town in New South Wales’ Central West region. Her mother, who sang and played the piano, introduced her to Simon and Garfunkel and her father, who ran a nursery, was a lover of Celtic music. “I played the violin from the age of five to 17, performed in church and sang duets with my sister at fairs,” she says. In high school, she watched RAGE, listened, along with her friends, to pop artists like Beyonce and fell in love for the first time. The latter proved formative; she wrote her first song, Stay with Me. She also discovered Joni Mitchell, the matron saint of singer-songwriters for whom folk music was a conduit for the range of female emotional expression.

“I learnt to play the guitar watching YouTube, discovered Joni Mitchell when Angus Stone did a cover of River and became obsessed,” she says. “When I started writing songs, I knew I wanted to do music. But also knew I might not make it.” She moved to Sydney at 17 and enrolled in the Australian Institute of Music (AIM). “My parents believed in me. Until then, I had been living a very simple life. But when I arrived in the city, it was confronting but so inspiring.”

Although Pavey cherished her time at AIM, she was also hungry to realise her artistic ambitions. She auditioned for The Voice, was mentored by Delta Goodrem and secured a record deal with Universal Music after placing third. Of course, there are two paths for reality TV stars – one that relies on the publicity blitz and another that’s set on creative longevity. Pavey chose the second.

“The Voice was terrifying, but I met so many great people especially Delta who is so supportive and from the early stages of the show I developed a thick skin,” says Pavey who performed a haunting version of her track Hold on triple J’s Like a Version in March 2016 to nearly a million YouTube hits. (Papercuts, her collaboration with the rapper Illy​ has been viewed over 5 million times.) “After the show, you get a lot of corporate gigs and it suddenly stops because you’re out of the limelight. I’m glad it dipped. I wanted to branch out into other styles of music. I had to be inspired by another vision.”

Your early 20s can be tumultuous; no less when you’re a young musician. Pavey, who released her debut folk-pop album The Music in 2013, tells me about a “strange” period in her life when she was working in a pharmacy and breaking up with a boy in a rock band. She also found herself making new friends and going out to gigs and music festivals. She discovered the sonic possibilities of electronic music and genre-defying artists such as FKA Twigs, Banks and Bat for Lashes for the first time.

“It was like nothing I’d ever heard before,” says Pavey, who is headlining Curve Ball, an electronic music event that’s part of Vivid Sydney. “I realised that I wanted to blend what I was hearing with folk music, connect with people on an emotional level but introduce really cool sounds.”

In 2016, she joined forces with producers Andy and Thom Mak and the singer-songwriter Gosling to write Fingertips, her first EP under the alter-ego Vera Blue. Last June, she released Perennial, a three-part album that mines the phases that follow a break-up – pain, discovery, reclamation. It’s the kind of album that begs to be played on repeat, equally at home in a bedroom or a dancefloor. Tracks such as First Week and Regular Touch layer soaring vocals and crystalline bass, catharsis and euphoria weaving together, helped along by Pavey’s ethereal voice.

Once, I made the total mistake of busking in Martin Place. No one gave me anything.

Pavey’s fan base often describe her, in hastily typed YouTube comments, as angelic. It’s as if her music, like the output of so many female singer-songwriters, is a result of divine intervention rather than artistry or effort. These days, the reaction of her audience reveals otherwise.

“When I played at Splendour in the Grass, he audience was chanting Vera Blue, Vera Blue,” she smiles. “It’s so nerve-racking being on stage but when you hear that it’s really special. You’re reminded that there are other people out there feeling what you’re feeling.”